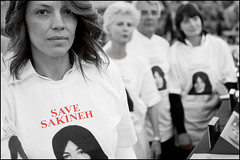 Another example of the “religion of peace”. Sharia law–coming to a city near you…thoughts?

Iranian state television has broadcast a purported statement by an Iranian woman sentenced to death by stoning for adultery in which she calls herself a “sinner.”

The stoning sentence against the 43-year-old Sakineh Mohammadi Ashtiani has been put on hold and is now being reviewed by Iran’s supreme court, but she still faces a possible death sentence by other means.

The outcry over the case is one of the latest thorns in Iran’s relationship with the international community, as the U.S., EU and international human rights groups have urged Tehran to stay the execution.

A woman identified as Ashtiani said in the state TV report shown Monday: “I am a sinner.” Her face was blurred and her words were voiced over in what the TV report said was a translation into Farsi from Azeri Turkish, which is spoken in parts of Iran.

College Ministry Kicked off Campus – for Requiring Leaders to Be Christian

Why are Lynn Hybels, Tony Campolo and Shane Claiborne hosting anti-Israel "Christ at the Checkpoint?"