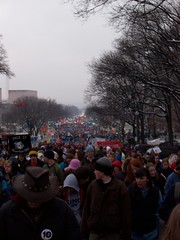 When problems or issues confront us, potential solutions are offered that may sound beneficial on the surface, but later they create grave consequences.  Such was the case in 1973 in the infamous Roe v. Wade hearing in front of the US Supreme Court.

An argument was made that a handful of women were having abortions in an unsafe manner, causing death and mutilation.  The pro-abortion proponents stated they simply wanted to make abortions “rare, but safe” for women in crisis.  The Supreme Court, in the most incredibly destructive decision ever made, somehow decided that abortion was a privacy matter protected by the constitution.

And how did that “rare, but safe” argument turn out?  More than 50 million babies have died in the US since 1973.

So once again the call of “we have to do something” was thrown out and the congress and president passed a huge government take over of one sixth of the American economy.  There were promises that abortions would not be funded and there would be no “death panels”.  And here we are one year later finding that monies are trying to be funneled to abortion groups and now doctors will be paid for ‘end of life consultations”.

“Manufacture a crisis—and provide OUR solution”—the progressive game plan.  We saw it in abortion and now in health care.  Well their solution is repressive government telling us what to do and how to behave.  How long will it be until they tell us who to worship?

I hope the American people have had enough and begin to take our government back to where it belongs—in the hands of the people.  And I hope we as Christians stop taking the freedoms God has given us for granted.  If the church of Jesus Christ is content to sit back and watch the government take us down the road to Sodom and Gomorrah, than shame on us.  We’ll have no one but ourselves to blame when our churches are closed and we huddle in hidden places to worship out of fear.

Think it couldn’t happen in our country?—think again. Whose Agenda are You Following? Don’t Worry, It Could Never Happen in America!