Egypt and The Middle East on the Brink 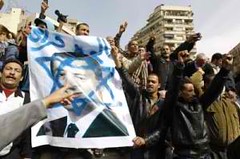 Watching events unfold in Egypt this week have been fascinating, but very ominous.  And as usual the mainstream media seems to only report what they want us to hear.  Take for instance the Muslim Brotherhood.  If you listen to the progressive media you would think the Muslim Brotherhood is simply a peaceful political movement working for needed reforms in Egypt.  But 2 clicks on the internet and you come to the website of the Muslim Brotherhood, where they proclaim:  “Allah is our god; the Koran is our law; and jihad is our way.”  They also call for the destruction of the state of Israel and state they will cancel the peace treaty between Egypt and Israel when they are in power.

Yesterday President Obama’s National Security Advisor stated that the Muslim Brotherhood was of no concern to Americans.  Well, it took about 15 minutes for the Obama administration to back away from that statement once they were challenged on it.

The facts are the Muslim Brotherhood was involved in the assassination of former Egyptian President Anwar Sadat because he sought peace with Israel.  They are a political movement, but they support the destruction of Israel and terrorist efforts.

An informed assessment of what is happening in Egypt shows just how dangerous things are becoming.  If Egypt falls into the hands of radical Islam and becomes a Shariah state as the Muslim Brotherhood calls for, we could be seeing Egyptian Christians imprisoned and murdered.  We will probably see the peace treaty with Israel dissolved and war in the middle east could be imminent.

Make no mistake, Egyptian President Mubarak needs to go—conservatives and progressives agree on that.  But the next few days will tell if the transition is to one of a peaceful democratic government or that of an Islamic Shariah state.  The stakes are huge; middle east peace may very well hang in the balance.  It would be nice if the mainstream media would report these facts instead of just spinning things to feed their progressive agenda.  But don’t count on that happening any time soon.

Please pray for the people of Egypt and for the people of Israel.  If things fall the wrong way, Israel could soon find itself once again surrounded by enemies determined to destroy her.  And this time I have little or no confidence that America will come to the aid of Israel.  Prepare your hearts and be in prayer—things are really starting to heat up.

Bright Light in the Midst of Great Darkness

Is Biblical Prophecy Being Ignored in the Church?