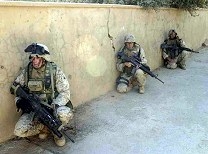 Ryan Mauro, founder of WorldThreats.com, National Security Advisor to the Christian Action Network, and an intelligence analyst with the Asymmetric Warfare and Intelligence Center.  Ryan has done extensive research for the Reform Party of Syria, a group dedicated to bringing democracy to that country. In 2005, he published his first book, Death to America: The Unreported Battle of Iraq, about the conflict in the Middle East.

Our Identity as Disciples of Jesus

Is Your Church and You a “Right Fit”?