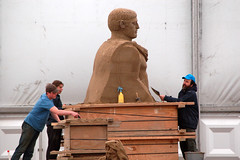 The Roman Empire was, at its time, the most powerful empire in the history of mankind. It dominated socially, economically and militarily.

Eventually, its power and influence diminished and it became another fallen man-made empire. While it remained a military power, internally it had cancer as the moral fiber of its government and citizens decayed over time.

I wonder if the United States is repeating this history.

While still the dominant military power in the world, our nation is losing influence and risks being relegated to a second class nation.
And the similarities to the Roman civilization and empire and its decay are significant. At the height of our power and influence, we began to decay internally as our moral and spiritual values began to disintegrate. We woke up one day to find that our Supreme Court found it was legal to kill unborn children. We began to acquire an attitude of entitlement, believing we deserved things for which we did not work. We began to pursue the desires of our flesh, instead of seeking God’s will for our lives.

Are we destined to continue this decline into mediocrity as a nation? Well, the choice is clearly up to us. We can take one of two paths—we can continue in our arrogance, turning our back on God’s laws and desires—or we can humble ourselves, ask God’s forgiveness, and dedicate ourselves to serving the God who blessed us with the freedoms and RESPONSIBILITIES He has given us. We can return to the biblical principles that made this a great nation—humility, hard work, sacrifice and a commitment to God. Or we can continue to turn our back on God, opting to do things our way.

Whether you are conservative or liberal, as Christians we need to understand the depths of the problems we face as a nation. We need to put aside our pride and self-righteousness and humble ourselves before God. We need to put aside our greed and attitude of entitlement, thinking we deserve everything we desire. After all, if God gave us what we deserved, the only thing we would have to show for it is eternal death and damnation.

“If my people, who are called by my name, will humble themselves and pray and seek my face, and turn from their wicked ways, then will I hear from heaven and will forgive their sin and heal their land. We cannot expect non-believers to heed this warning from God—it is up to us as Christians. Whether we are rich or poor; leaders or followers; conservative or progressive—the onus is upon us as Christians. Will WE humble ourselves before God? Or continue in our arrogance?

A call for sound biblical and spiritual discernment

Eating a Slice of Humble Pie