Madison–Battle in the Spiritual Realm 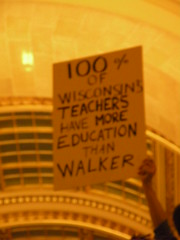 With so much going on locally, nationally and internationally these days, it is crucial that we as born again believers in Jesus Christ, remember where and who the battle is against.  The lingering situation in Madison is pitting brother against brother as outside influences come in to inflame an already delicate situation.  Churches are feeling friction as members take sides on this difficult issue.  And there is no doubt who is really behind all this—satan.  He knows that if he can divide the bride of Christ he can advance his agenda more rapidly.  As Christians—and brothers and sisters to one another—it is crucial that we do not take his bait and turn this into a battle between one another.

In the past few years, it seems that chaos has broken out everywhere.  In Madison; nationally as we go through major economic and social upheavals; and in the Middle East where we know the last great battle between God and evil will take place.  And it is very easy for us as Christians to lose our focus on God and His Word.  All the more reason to intensify our efforts in prayer and study of God’s Word.

I believe we are seeing the birth pains signaling our entry into the final days.  Things seem to be lining up according to the prophecies of the bible.  But our duties remain the same—prayer, love and staying true to God’s Word and teachings.  Fear is a powerful enemy—it leads all of us to want to act in ways contrary to God’s teachings.  And on our own, we are powerless to fight satan.  But He who is in us is greater than he who is in the world.  In these difficult times, it is paramount that true Christians find our hope not in things of this world—but in God’s eternal promises.

So on what we face in Madison, I ask that each of us take a step back from the rhetoric and passionate emotions and pray for one another.  There is far more power in the prayer of righteous men than there is in arguing with one another.  If as Christians we cannot act in a Christ-like manner on this issue, what will happen when we are faced with even more devastating issues as the enemy becomes even more bold?

Please commit to daily prayer for each other and the Body of Christ—I think we need it now more than ever.

Religious freedoms: What impact will these elections have?

Marxism in America ‘Cooking Up Chaos’

Know the End of the Book