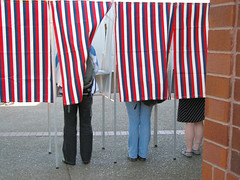 Well, the votes have been counted and Wisconsin seems to be headed to months of recounts and appeals on who will be on the State Supreme Court.  There is much at stake:  the state budget; school choice that will help parents send their children to religious schools; and issues on the pro-life agenda.  Prepare yourself for some bitter debates in a state and nation that are polarized politically, socially and spiritually.

Elections have consequences.  Reportedly, 39% of self-professed born again Christians voted for Barack Obama in 2008—a man known as the most pro-abortion presidential candidate ever.  A man who now supports gay marriage in opposition to his campaign promises.  And what did we get?  A President who will fight to the death to keep funding Planned Parenthood and the murder of children.  And a president who has instructed his Attorney General to not fight for current law recognizing marriage as between a man and a woman.  Elections have consequences.

What did each of us vote for yesterday?  Time will tell.  But the bigger question is this:  Did we even bother to take the time to pray about who God might want us to vote for?  Did we check out the candidates to the best of our ability and discern where they might stand on issues important to God?

In First Samuel, the Jews asked God for an earthly king.  Listen to God’s message to Samuel when he brought their wish to Him:  “Listen to all that the people are saying to you; it is not you they are rejecting but me as their king.  As they have done from the day I brought them out of Egypt until this day, forsaking me and serving other gods.  So listen to them—but warn them solemnly and let them know what the king who will reign over them will do.”

In every election, we choose people who will govern over us and lead us.  And the choices we make will have consequences.  Will we answer to God if we vote for our pocketbooks over the lives of innocent children?  What does that say about where our heart really is?

In Matthew Chapter 12, Jesus says this: “I tell you that men will have to give account on the day of judgment for every careless word they have spoken.”   When we vote, we speak and our voices are heard.  We elect those who will lead us and lay the foundation for our morals and actions as a people.  And we will be held accountable to God. Have We Reached the Point of No return? Who Wants to Raise Your Children?