Finding heroes in an unlikely place 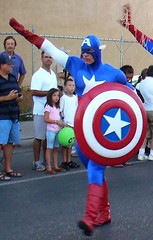 Hollywood isn’t the first place you might think to look for heroes, unless you’re thinking of Batman or Captain America.  But as our guest, Dr. Ted Behr will share, there are plenty of filmmakers and actors who not only are faithful Christians, they are using their craft and careers to glorify Jesus Christ!

Baehr is the author of How to Succeed in Hollywood (Without Losing Your Soul), Founder and Publisher of Movieguide, and Chairman of the Christian Film & Television Commission, as well as a noted critic, educator, lecturer, and media pundit. His life’s purpose is to be used of God to redeem the values of the media while educating audiences on how to use discernment in selecting their entertainment.

Plus in our second half hour, where are the heroes in our nation’s capitol?  Mike will share some thoughts on the budget stalemate you won’t want to miss. Sharing the Gospel without watering it down