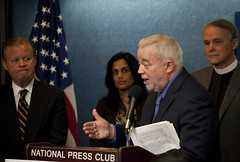 Earlier this week we asked a question: How do we fight against the inevitable? God’s Word is clear that in these final days evil will increase and man will grow increasingly rebellious against God. Evil will be seen as good and many who call themselves Christians will abandon the faith for a false religion.

But on the right—the conservative side—there are some who hold similar beliefs. They believe God has given man the authority to rid the world of evil by conquering institutions of government, politics, media, business and education.

Both of these teachings fly in the face of biblical prophecy. So let’s try to make some sense out of this mess. The bible tells us man will grow increasingly evil in the final days. The world will be faced with chaos and will try to unite under one called the anti-christ. He will marshal the forces of the world to do battle with Jesus and will be crushed. Jesus will vanquish evil and establish His everlasting Kingdom.

Responsibility and involvement in politics—yes. Allowing it to consume us and take our focus off of God’s Word—no. Thinking we can change how God says the story is going to end? Heaven forbid!

Are You On the Narrow Path?

Our New year's Resolution as Christians