Is Rick Warren On a Slippery Path? 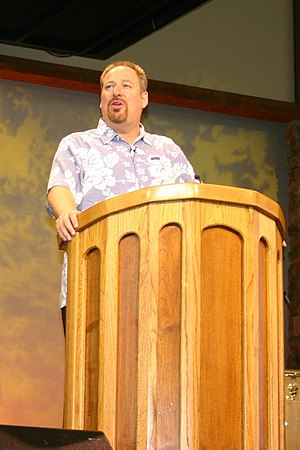 In Galatians 1:6, Paul says:  “I am astonished that you are so quickly deserting the one who called you by the grace of Christ and are turning to a different gospel—which is really no gospel at all!  Evidently some people are throwing you into confusion and are trying to pervert the gospel of Christ.

Is Rick Warren, America’s pastor, throwing people into confusion by mixing the gospel with other religions and eastern mysticism?

Rick Warren has embraced the deeply flawed “Common Word Between Us” document from Islamic leaders.  Islam—a religion that denies Jesus Christ is God.

Rick Warren has invited Dr. Mehmet Oz, a man heavily influenced by Sufi Muslims, into his church to teach on holistic health.  His wife is a Reiki master.  Dr. Oz is a follower of cultist Emanuel Swedenborg, a man who claimed all religions lead to God and that Swedenborg was exclusively used by God to bring greater depth and mystic knowledge to the Word of God.

Rick Warren was mentored by universalist Robert Schuller.  Among people he quotes and uses in his books are M. Scott Peck, another universalist.  Rick Warren endorsed and wrote the forward to Dan Kimball’s book “The Emerging Church”.

A few years ago, Rick Warren developed his “Peace Plan”.  Originally, the “P” stood for planting churches.  But Warren changed that to “promoting reconciliation”.  He now calls for all religions to come together to promote world peace and usher in a new world order.  He serves on the Board of Directors for Tony Blair’s global spirituality movement.

In spite of all this, Rick Warren is revered by many Christians and pastors throughout the country.   One has to wonder just what has to happen for people to sit up and take a look at what is going on at Saddleback Church.

I am not saying Rick Warren is evil.  And I am not questioning his eternal soul—God alone must do that.  But something is happening here and “America’s Pastor” seems to be sliding down a very dark road.  A road where all religions seem to be on equal footing; a road where eastern Hindu mysticism is being taught in his church; and a road where universalism seems to be more and more accepted.

Rick Warren is a man of tremendous influence.  He and Oprah Winfrey are considered two of the most influential spiritual people in the world.  And Rick Warren may indeed believe he is doing God’s work.  But it is up to each of us to be good Bereans and check out everything he teaches and stands for against the Word of God.

“For the time will come when men will not put up with sound doctrine.  Instead, to suit their own desires, they will gather around them a great number of teachers to say what their itching ears want to hear.  They will turn their ears away from the truth and turn aside to myths.”

Pray that God gives us wisdom and discernment to discern what we are seeing and being taught these days.  Things are changing rapidly and it will be increasingly difficult to discern truth from lies.  Stay in God’s Word so we can recognize the counterfeit when we see it.

“Let Someone Else Do It!”

Revival Begins with You and Me