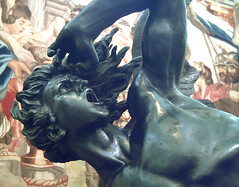 I find it quite interesting that the Christian world and the secular world seem to be headed down different paths these days regarding the spirit world.  As the New Age movement is growing, being spurred on by Oprah Winfrey and the New Age books she endorses, Christians seem to be paying less attention to life in the spiritual realms these days.

The bible is full of references to the spiritual realm.  In Leviticus and Deuteronomy God forbids us from being involved with mediums and familiar spirits.  In 1 Samuel 16, verse 14 it says “the spirit of the Lord had departed from Saul, and an evil spirit of the Lord tormented him.”  And Ephesians is full of references to rulers, authorities and forces of evil in the heavenly realms.  And of course Paul tells us our battle is not against flesh and blood, but against the powers and principalities in the spiritual realm.

The New Age Movement is all about the spiritual realm and is suggesting that all people can connect on the spiritual level and together become god.  And sadly, as we will discuss in the coming weeks, many Christian leaders are openly encouraging their followers to join in this new age movement, wanting us to all become one and achieve more together—a modern day tower of Babel.

So as Christians who still believe in the absolute truth of God’s Word, I think it is important we spend some serious time seeing what God has to say about life and battle in the spiritual realm.  This will take discernment and the wisdom of the Holy Spirit because it can be treacherous ground.

How do we distinguish between spiritual attack and the weakness of our own flesh?  When things seem to be going wrong at every turn, is it Satan fighting us?  Or is it a consequence of our own poor decisions?  Or is God allowing difficulties in our life to teach us and train us for greater things?

We have been so blessed as Christians living in this great country of ours.  As a whole, things have been pretty easy for us compared to Christians in Asia, Africa and the Middle East.  But times are changing.  As the battle in the spiritual realm heats up and we approach the final days before the Lord’s return, things will only get more challenging.  And in my opinion, the real challenge will be this:  There is a counterfeit Christian movement that is growing, luring ignorant Christians into a dangerous “New Age Christianity”.  Unless we are anchored in the truth of God’s Word we will not recognize this counterfeit when we are confronted with it.  And many will be deceived, falling for something that might look bright and shiny on the outside—but full of deceit and corruption on the inside.

Be on guard—and be in the Word of God, seeking and knowing His truth.  Understand as best we can what God has to say about the battle going on in the spiritual realm.  God is moving his chess pieces into position—and so is the enemy.  It will be one hell of a battle—and we will have to choose what side we are on–a choice that will have eternal consequences for every one of us.

The King's Way denial has no clothes