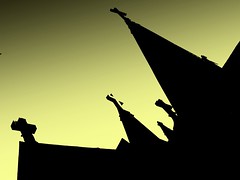 Church as we know it is changing, according to trend watchers like George Barna, whose recent poll studies suggest that the explosion of Home Churches in America is going to change the way we “do church:”

Here is an interesting article on trends in the Church from InfoReligion:

A growing number of American Christians – Catholics and Evangelicals alike – are talking about the down-sizing of the established Church as we know it. The rise of House Churches, Simple Churches, Organic Churches, Cell Churches, Open Churches and Church-planting Movements indicate the growing level of discontent with Church-As-Usual. This is true among Church leaders as well as the Christian populace. As one Blogger wrote: “The era of spectator Christianity is now ending because the urgency of our present cultural crisis in America and abroad simply won’t permit it!”

While Christianity seems to be flourishing in Africa, Asia and Latin America, many believe it is dying in the U.S. and is wheezing on its deathbed in Europe and Canada. As America enters what many refer to as the “Post Christian Era” (I prefer the phrase Post Edifice Era), with Islam on the rise and the level of sin in our culture soaring out of control, an alarm seems to be going off deep within the hearts of many followers of Christ. (read it here)

Today we’re talking about the Home Church and also the Cell Church ” G12 Vision.” (Plus a plug for small groups!)

The Sufficiency of the Scriptures

Lordship Salvation and why it is controversial