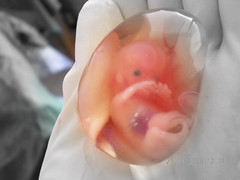 Many were hoping this would pass, but unfortunately the voters in Mississippi defeated the Personhood Amendment last night:

The controversial Amendment 26, better known as the “Personhood” amendment, was rejected by voters in Mississippi on Tuesday by a vote of 55 to 45 percent.

Language in the amendment defined life as beginning at conception and would have banned abortions statewide. Opponents of the measure, including some pro-life advocates who were uncomfortable with the amendment’s wording, would have certainly pursued legal challenges if the proposal had passed.

Supporters of the “personhood” amendment wanted to use Mississippi as a test case and knew a victory would send “shockwaves” through the nation if passed.

Personhood USA, a Colorado-based group, was behind the effort to get the amendment in front of the voters. They are also attempting to get similar initiatives on the ballots in Montana, Ohio, Florida and Oregon.

Voters in Colorado rejected a similar amendment in 2008 and again in 2010.

One of those who voted against the amendment was Amy Brunson. She had endured a prior rape and was also worried that her friends who had children through in vitro fertilization would be prohibited from using the procedure in the future.

“The lines are so unclear on what may or may not happen,” Brunson told the Jackson Clarion-Ledger. “I think there are circumstances beyond everybody’s control that can’t be regulated through an amendment.”

Controversy surrounding the amendment’s language divided both the religious and medical communities. Outgoing Republican Gov. Haley Barbour, who was unable to seek a third term because of term limits, said he reluctantly voted for the amendment while expressing concern about the wording and how it would be legally interpreted if passed.

“Some very strongly pro-life people have raised questions about the ambiguity and about the actual consequences of whether there are unforeseen, unintended consequences,” Barbour said in a television interview on Fox News last week. “And I’ll have to say that I have heard those concerns and they give me some pause.”

Churches also weighed in on the issue. The Mississippi Baptist Convention, the state’s largest Christian denomination, supported the proposed amendment through their lobbying organization. However, the Episcopal Diocese of Mississippi and the United Methodist Church General Conference opposed the measure.

The Catholic Diocese of Jackson chose not to take a position on the amendment.

Mississippi does have strict laws governing abortion such as requiring parental or judicial consent in order for a minor to get an abortion and mandatory in-person counseling and a 24-hour waiting period before any woman can get an abortion in the state.