Mormonism: the elephant in the booth 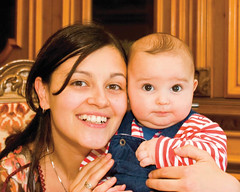 Today we talked about politics, and no matter what your take is on whether faith should or shouldn’t play a role, we at least need to be aware of the issues. And as Christians, the topic of Mormonism should not make us feel “sticky” or “squishy.”

The candidates for president and their campaign messages will focus on this and it will force you at some point to hear about it and perhaps even weigh in. Now this can get uncomfortable, because many of us know, work with and are friends with Mormons and they might just be the nicest, sweetest people you know! But we need to be able to discern the basic doctrinal differences between Christianity and Mormonism. And when you study those differences, you plainly see that the two religions could not be more different, even though both claim to know and love the biblical Jesus.

Over on our website, we created a new page under “Topics We Track,” dedicated to helping you discern. What you’ll find there is a side-by-side comparison of what Mormons believe and what Christians believe about God, Salvation, Jesus, Scripture, Truth and the Holy Spirit.

The Mormon religion is also known as the Latter Day Saints (LDS). There are was founded less than two hundred years ago by a man named Joseph Smith. He claimed to have received a personal visit from God the Father and Jesus Christ who told him that all churches and their creeds were an abomination. Joseph Smith then set out to begin a brand-new religion that claims to be the “only true church on earth.” The problem with Mormonism is that it contradicts, modifies, and expands on the Bible. Christians have no reason to believe that the Bible is not true and adequate. To truly believe in and trust God means to believe in His Word, and all Scripture is inspired by God, which means it comes from Him (2 Timothy 3:16).

Mormons believe that there are in fact four sources of divinely inspired words, not just one: 1) The Bible, re-translated.  2) The Book of Mormon, which was “translated” by Smith and published in 1830. Smith claimed it is the “most correct book” on earth and that a person can get closer to God by following its precepts “than by any other book.” 3) The Doctrine and Covenants, containing a collection of modern revelations regarding the “Church of Jesus Christ as it has been restored.” 4) The Pearl of the Great Price, which is considered by Mormons to “clarify” doctrines and teachings that were lost from the Bible and adds its own information about the earth’s creation.

What does that mean for you? It means that the mission field is wide open, and it starts with those little conversations you have with your friends, family, coworkers and neighbors. but before we open our mouths, we need to know what we’re talking about and to whom.

We found this table from Christian Apologetics & Research Ministry (CARM). And when you see it, it will become very obvious that Mormonism does not agree with the Bible. In fact, Mormonism has simply used the same words found in Christianity and redefined them. But with a proper understanding of what Mormonism really teaches, you will be able to see past those definitions into the real differences between Christianity and Mormonism.The difference is the difference between eternal life and damnation.

Back to the basics: Lordship Salvation?

An age of lawlessness