Guilt By Association: Is it Biblical? 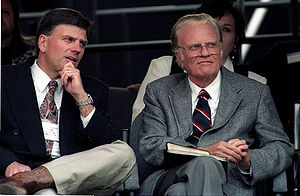 The recent concerns and controversies stirred up by many Christians over people like Franklin Graham, Kirk Cameron and Jonathon Cahn appearing on secular shows like Glenn Beck and networks like MSNBC are worthy of a lot of thoughtful discussion.  As with most disagreements there are two polar opinions from some Christians.  Some believe Christians should never appear on a show like Glenn Beck, since Beck is an avowed Mormon.  They feel to do so brings a sort of credibility to Mormonism, leading some to believe the guest is de facto endorsing Mormonism as mainstream Christianity.

Others feel Christians should appear wherever and whenever a door is opened to share the gospel, regardless of who the host is or what the show stands for.  They have no problem if a Christian author or teacher appears with Ellen Degeneress, Doctor Oz or Oprah Winfrey.  They point to the scriptures that show Jesus ate with tax collectors and prostitutes.

Franklin Graham was blasted by some because even though he firmly criticized President Obama’s stances on abortion and homosexual marriage, he refused to say that Obama was not a true Christian.  Jonathon Cahn was criticized for not speaking out against Mormonism on the Glenn Beck Show while promoting his book “The Harbinger”.  Some felt he was de facto endorsing Mormonism as Christianity.  And some are now accusing Kirk Cameron of being a dominionist because he is calling for a return to the Christian values our nation was founded upon.

These situations create quite the dilemma for true believers in a world rapidly spinning into spiritual chaos and confusion.  And I find sometimes that by personalizing the issue at hand it helps me find clarity:  So here goes.  I have written a book, The Suicide of American Christianity.  One section takes a hard look at the Willow Creek Leadership Conferences that Bill Hybels hosts every year.  I am critical of the fact that leaders are being brought in who do not live or teach biblical standards.  But if I were invited by Bill Hybels to speak at the Leadership Conference, I think I would accept.  I would remain true to my Christian convictions and would tell those in attendance not to look to men for wisdom on leadership, but to look to Jesus to understand what real leadership should be.   But I don’t think I would take that opportunity to criticize Bill Hybels at the conference.  I would speak the truth, but not see this as an opportunity to pick a fight.

It’s always easy to be a Monday morning quarterback, criticizing the play calling after the fact.  And by all means we should hold one another accountable for what we do and say as Christians—and even for our associations.  But we also need to tread carefully that we do not destroy committed Christians who perhaps don’t do or say everything we think they should.  Perhaps God will bless some of us with an opportunity to appear in front of millions one day to proclaim His truth.  If that happens we might find that walking that walk is much more difficult than talking the talk.  By all means hold fellow Christians accountable for what they say, don’t say and do.  But let us tread very carefully with the “guilt by association” charges.  Jesus and Paul were accused of the same things when they walked the earth.

Time to step it up

Men, Are You fit to Lead?

The Christian Vote–Reflecting Our True Values