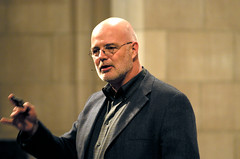 Hat tip to Chris Rosebrough for the heads up:

Brian McLaren, author of A New Kind of Christian and a prominent Christian speaker, led a non-traditional marriage commitment ceremony this weekend, according to The New York Times. Held at the Audubon Naturalist Society in Chevy Chase, Maryland, this ceremony included “traditional Christian elements,” but no bride. And the groom—one of them—was McLaren’s son, Trevor McLaren. The Timesreports that Trevor McLaren wed Owen Ryan Saturday in Washington, D.C., followed by the afternoon commitment ceremony.

Brian McLaren, who formerly was chair of the board for Sojourners, is among a minority of evangelical progressives who advocate that the church should abandon heterosexism and move toward reconciliationwith homosexuals.

CT has previously covered Brian McLaren, including reviews of his book Everything Must Change and The Secret Message of Jesus, and the emergent church, with which McLaren has been associated.

The morphing of the Emergent movement: Can you see it now?

Who is Influencing Whom?

Back to the basics: a conversation about the Emergent Church