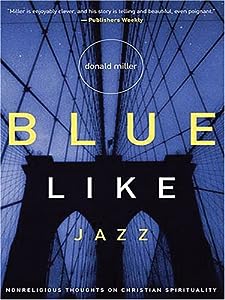 While sitting on my deck earlier this evening, I watched a savage thunderstorm gather, then dump high winds, lightning, and sheets of rain on the trees and hills.

I watched the storm for some time, as it came near.

About the same time I noticed on my phone a Twitter message from Cameron Strang. It was a photo of the Relevant magazine publisher with author Donald Miller, in Jerusalem. The whole thing intrigued me, because only a week before, I’d attended the Catalyst East conference, where thousands of young evangelical leaders met to hear speakers like Andy Stanley, Jen Hatmaker, and Lynne Hybels.

Strang was there to promote his magazine. The public didn’t know at the time that in a few short days, he would join other progressive evangelicals and members of the Religious Left for a tour of what they refer to as Israel/”Palestine.”

Miller, who wrote Blue Like Jazz a decade ago, has seen his star rise among younger, progressive evangelicals. Think of the book as sort of a Catcher in the Rye manifesto for 20-somethings who lean somewhere left of center both politically and religiously.

This is all Relevant because these individuals met up in Israel, to take part in ongoing efforts at “peacemaking,” an agenda driven largely by Hybels and her Palestinian friend, Sami Awad. The addition of Miller to the traveling party is significant, since he is listened to by growing numbers of Millennials, those who have largely abandoned their parents’ way of “doing church.” Among the things jettisoned is a commitment to support Israel.

“Off to Israel in the morning. Blogs are all lined up for the week. Can’t wait to tell some stories when I get back. Will miss y’all.”

From that, we can expect a whole raft of “stories” which will present the Palestinian narrative against a backdrop of alleged Israeli abuses. Make no mistake, Donald Miller’s newfound interest in “Palestine” will open up a new front in the propaganda wars being waged against the Jewish state.

No one is denying that there are plenty of sincere, well-meaning people in the peacemaker movement. The problem is, they are being schooled by the Palestinians themselves. The so-called Palestinian narrative, coming in via people like Sami Awad, isn’t different from the agenda of former PLO chief Yasser Araft, in any real sense. The Palestinians then wanted to eliminate Israel any way possible; today’s “two-state solution,” “one-state solution,” etc., is simply window-dressing for the goal of eliminating the Jewish state.

Professing to be concerned about Israel’s security, while devoting every waking moment to undermining it totally is textbook disingenuity.

One can safely say that Strang, Hybels, Miller & Friends (including Todd Deatherage) will not hear about the Savoy Hotel massacre, or the Ma’a lot Massacre (a 1974 terrorist attack on an Israeli school, carried out by the so-called “Democratic Front for the Liberation of Palestine,” in which 25 hostages were killed). They won’t hear about Ron Arad, or the Fogel family.

Strang tweeted a couple days ago that he was preparing to visit an Israeli “settler’s” home. Hybels in particular has opened a clever strategy of emphasizing the balance of her visits; for example, she will talk with members of the Israeli Knesset, Palestinian families, Israeli and Arab peace activists, “settlers,” etc.

The reality is the striking imbalance of these tours/visits, because no doubt the “settlers” will make all sorts of provocative statements that the Western peace activists can use to demonstrate that these folks are extremists.

Bottom line: the result of these tours—stacked with evangelical leadership from America—is that more Americans will hear subtle and overt claims that the absence of peace in the Middle East is Israel’s fault. They will hear that biblical support for Israel is illegitimate, even a “sin,” that Bibi Netanyahu loves war, that Israeli communities in the country’s heartland are illegal, etc.

This narrative is being soaked up by a generation raised on The Simpson’s, multiculturalism, appeasement, socialist/Marxist ideas, and the mocking of the Bible, among many other things.

The propaganda forces arrayed against the Israelis right now is the most sophisticated the Jews have ever seen. As I’ve been writing for some time now, a key (but greatly overlooked) front in that information war is the Evangelical community in America. Pro Israel activists are waking up to this reality very late.

I invite you to read online just a few articles from Relevant magazine—www.relevantmagazine.com. If you “search” for articles about Israel/”Palestine,” you will find a leftist view of the conflict. Right now, Cameron Strang has staff members over there with him, and the reportage will be decidedly different from that of evangelicals a generation ago.

Recently, another Twitter message summed-up this strategy quite well:

Tell your story, don’t preach. Your audience will know what to do with it #PearlsOfWisdom @US_PNB Entrepreneurs delegation #Palestine

Notice the emphasis on storytelling. Narrative. The dislike of “preaching.” Younger generations today don’t like to be preached-at; they’ll tell you that. They want to hear, rather, “story.” Your experience. My experience. A downtrodden people’s story.

Individual human experience, story, narrative can depart from biblical truth. I’ll give you an example.

Ten years ago, I had a lengthy email experience with one of the Palestinian leaders now educating the Blue Like Jazz generation. He finally told me that Palestinians, particularly Palestinian Christians, simply don’t like the Old Testament. Why? Because of the promises to the Jews! Keep in mind, all totalitarian regimes loathe the Bible, especially the Old Testament.

Let’s look at this another way. Let’s say that I disagree with the biblical command to love my wife as Christ loved the Church (and gave Himself for it). That isn’t my story. I like a story in which I dominate my wife and belittle her and refuse to honor her.

I just reject that part of the Bible, because it doesn’t fit the narrative I’m after.

An entire alternate reality is being created for Israel as we speak. Replacement Theology, Liberation Theology, the Palestinian narrative.

If you were the Arabs, and you’d been blown off the battlefield a few times by the Israelis, what would you do?

The Arabs aren’t stupid. They simply internalized and refined the Soviet propaganda that Arafat learned, and decided to try and defeat the Jews in the realm of ideas and principles. Arafat, who found that overt terrorism landed one in a Tunisian desert, with lizards and sand, began cultivating mainline Church officials in the 1980s and 1990s. Now, younger Palestinian leadership, even that of NGOs like Sami Awad’s Holy Land Trust, have refined the strategy and message even further.

They are influencing your kids.

When I was at Catalyst, I had 57 individual conversations with attendees. I asked them about their views of Israel and the Palestinians. Not one advanced what I’d call a pro Israel view. Yet when I asked them for specifics: can you tell me why you believe Israel’s communities (“settlements”) are illegal and illegitimate? Do you know why the security fence was erected? Do you know what the ’67 borders are? The 1949 Armistice Lines?

Not a single young person I asked could answer the questions. They could only tell me that IDF soldiers detain pregnant Palestinian women at checkpoints, and that Israel would not engage in serious peace talks with the Palestinians. Curiously, when I asked them how they knew that, they told me that’s what Lynne Hybels, Shane Claiborne, Tony Campolo, and Jim Wallis say.

Don Miller might be the most sincere guy of all time. Lynne Hybels might believe everything she’s spreading about peacemaking in the Middle East. It’s possible Cameron Strang is attempting to use his powerful bully pulpit among young evangelicals to effect positive change.

The real question, though, is what is the Palestinian leadership up to in this regard? Said another way, who is telling the truth in this…story?

When one considers the Palestinian leadership’s agenda, coupled with the interconnectedness of America’s young evangelicals, one must face up to the fact that the image of Israel in the United States is heading in a darker direction.

In Blue Like Jazz, Miller wrote about—and made famous—“Mark, the Cussing Pastor.” This refers to Mark Driscoll, of Seattle’s Mars Hill Church. Driscoll’s often profane, provocative approaching to preaching had made him a hit with Millennials.

Recently, Driscoll taught from the book of Esther. At one point, he said that there are no miracles in the book!

There are no miracles, because Driscoll and his legion of friends minimize the role of Israel in the Bible. Whole generations have now been raised on biblical minimalism, moral relativism, and totalitarian propaganda.

Targeting America’s young evangelical leadership is the smartest the thing the other side has done in decades.

That’s why a seemingly winsome chap like Donald Miller can travel to a place called Palestine, and believe he just experienced reality.

"Barton: Glenn Beck Is A Christian Who Identifies As Mormon Simply Out Of Loyalty"

Lordship Salvation and why it is controversial