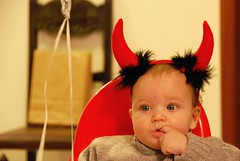 It’s October 31, and you know what that means. That’s right, it’s Reformation Day. For many evangelicals, that’s not even on your radar. Instead, Halloween is the big topic of the day. You’ll see folks today abstain from the rituals, wishing to be set apart from this event and it’s occultic origins. Others will be dressing up, attending secular or church-based festivals and trick-or-treating.  No matter how you are observing or not observing Halloween today, we’re asking Christians to be patient with one another, understand where the other side is coming from, and yes, continue to stand for God’s Word.

Here is some food for thought, reprinted from John MacArthur’s Grace To You site today:

The Pagan Origin of Halloween
The name “Halloween” comes from the All Saints Day celebration of the early Christian church, a day set aside for the solemn remembrance of the martyrs. All Hallows Eve, the evening before All Saints Day, began the time of remembrance. “All Hallows Eve” was eventually contracted to “Hallow-e’en,” which became “Halloween.”

As Christianity moved through Europe it collided with indigenous pagan cultures and confronted established customs. Pagan holidays and festivals were so entrenched that new converts found them to be a stumbling block to their faith. To deal with the problem, the organized church would commonly move a distinctively Christian holiday to a spot on the calendar that would directly challenge a pagan holiday. The intent was to counter pagan influences and provide a Christian alternative. But most often the church only succeeded in “Christianizing” a pagan ritual–the ritual was still pagan, but mixed with Christian symbolism. That’s what happened to All Saints Eve–it was the original Halloween alternative!

The Celtic people of Europe and Britain were pagan Druids whose major celebrations were marked by the seasons. At the end of the year in northern Europe, people made preparations to ensure winter survival by harvesting the crops and culling the herds, slaughtering animals that wouldn’t make it. Life slowed down as winter brought darkness (shortened days and longer nights), fallow ground, and death. The imagery of death, symbolized by skeletons, skulls, and the color black, remains prominent in today’s Halloween celebrations.

The pagan Samhain festival (pronounced “sow” “en”) celebrated the final harvest, death, and the onset of winter, for three days–October 31 to November 2. The Celts believed the curtain dividing the living and the dead lifted during Samhain to allow the spirits of the dead to walk among the living–ghosts haunting the earth. 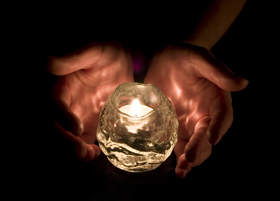 Some embraced the season of haunting by engaging in occult practices such as divination and communication with the dead. They sought “divine” spirits (demons) and the spirits of their ancestors regarding weather forecasts for the coming year, crop expectations, and even romantic prospects. Bobbing for apples was one practice the pagans used to divine the spiritual world’s “blessings” on a couple’s romance.

For others the focus on death, occultism, divination, and the thought of spirits returning to haunt the living, fueled ignorant superstitions and fears. They believed spirits were earthbound until they received a proper sendoff with treats–possessions, wealth, food, and drink. Spirits who were not suitably “treated” would “trick” those who had neglected them. The fear of haunting only multiplied if that spirit had been offended during its natural lifetime.

Trick-bent spirits were believed to assume grotesque appearances. Some traditions developed, which believed wearing a costume to look like a spirit would fool the wandering spirits. Others believed the spirits could be warded off by carving a grotesque face into a gourd or root vegetable (the Scottish used turnips) and setting a candle inside it–the jack-o-lantern.

Into that dark, superstitious, pagan world, God mercifully shined the light of the gospel. Newly converted Christians armed themselves with the truth and no longer feared a haunting from departed spirits returning to earth. In fact, they denounced their former pagan spiritism in accord with Deuteronomy 18:

There shall not be found among you anyone…who uses divination, one who practices witchcraft, or one who interprets omens, or a sorcerer, or one who casts a spell, or a medium, or a spiritist, or one who calls up the dead. For whoever does these things is detestable to the Lord (vv. 10-13).

Nonetheless, Christian converts found family and cultural influence hard to withstand; they were tempted to rejoin the pagan festivals, especially Samhain. Pope Gregory IV reacted to the pagan challenge by moving the celebration of All Saints Day in the ninth century–he set the date at November 1, right in the middle of Samhain.

As the centuries passed, Samhain and All Hallows Eve mixed together. On the one hand, pagan superstitions gave way to “Christianized” superstitions and provided more fodder for fear. People began to understand that the pagan ancestral spirits were demons and the diviners were practicing witchcraft and necromancy. On the other hand, the festival time provided greater opportunity for revelry. Trick-or-treat became a time when roving bands of young hooligans would go house-to-house gathering food and drink for their parties. Stingy householders ran the risk of a “trick” being played on their property from drunken young people.

Halloween didn’t become an American holiday until the immigration of the working classes from the British Isles in the late nineteenth century. While early immigrants may have believed the superstitious traditions, it was the mischievous aspects of the holiday that attracted American young people. Younger generations borrowed or adapted many customs without reference to their pagan origins.

Hollywood has added to the “fun” a wide assortment of fictional characters–demons, monsters, vampires, werewolves, mummies, and psychopaths. That certainly isn’t improving the American mind, but it sure is making someone a lot of money.

The Christian Response to Halloween
Today Halloween is almost exclusively an American secular holiday, but many who celebrate have no concept of its religious origins or pagan heritage. That’s not to say Halloween has become more wholesome. Children dress up in entertaining costumes, wander the neighborhood in search of candy, and tell each other scary ghost stories; but adults often engage in shameful acts of drunkenness and debauchery.

So, how should Christians respond?

First, Christians should not respond to Halloween like superstitious pagans. Pagans are superstitious; Christians are enlightened by the truth of God’s Word. Evil spirits are no more active and sinister on Halloween than they are on any other day of the year; in fact, any day is a good day for Satan to prowl about seeking whom he may devour (1 Peter 5:8). But “greater is He who is in you than he who is in the world” (1 John 4:4). God has forever “disarmed principalities and powers” through the cross Christ and “made a public spectacle of them, triumphing over them through [Christ]” (Colossians 2:15).

Second, Christians should respond to Halloween with cautionary wisdom. Some people fear the activity of Satanists or pagan witches, but the actual incidents of satanic-associated crime are very low. The real threat on Halloween is from the social problems that attend sinful behavior–drunk driving, pranksters and vandals, and unsupervised children. 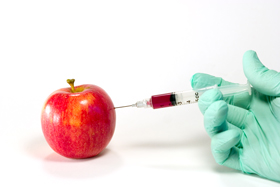 Like any other day of the year, Christians should exercise caution as wise stewards of their possessions and protectors of their families. Christian young people should stay away from secular Halloween parties since those are breeding grounds for trouble. Christian parents can protect their children by keeping them well-supervised and restricting treat consumption to those goodies received from trusted sources.

Third, Christians should respond to Halloween with gospel compassion. The unbelieving, Christ-rejecting world lives in perpetual fear of death. It isn’t just the experience of death, but rather what the Bible calls “a certain terrifying expectation of judgment, and the fury of a fire which will consume [God’s] adversaries” (Hebrews 10:27). Witches, ghosts, and evil spirits are not terrifying; God’s wrath unleashed on the unforgiven sinner–now that is truly terrifying.

Christians should use Halloween and all that it brings to the imagination–death imagery, superstition, expressions of debauched revelry–as an opportunity to engage the unbelieving world with the gospel of Jesus Christ. God has given everyone a conscience that responds to His truth (Romans 2:14-16), and the conscience is the Christian’s ally in the evangelistic enterprise. Christians should take time to inform the consciences of friends and family with biblical truth regarding God, the Bible, sin, Christ, future judgment, and the hope of eternal life in Jesus Christ for the repentant sinner.

There are several different ways Christians will engage in Halloween evangelism. Some will adopt a “No Participation” policy. As Christian parents, they don’t want their kids participating in spiritually compromising activities–listening to ghost stories and coloring pictures of witches. They don’t want their kids to dress up in costumes for trick-or-treating or even attending Halloween alternatives.

That response naturally raises eyebrows and provides a good opportunity to share the gospel to those who ask. It’s also important that parents explain their stand to their children and prepare them to face the teasing or ridicule of their peers and the disapproval or scorn of their teachers.

Other Christians will opt for Halloween alternatives called “Harvest Festivals” or “Reformation Festivals”–the kids dress up as farmers, Bible characters, or Reformation heroes. It’s ironic when you consider Halloween’s beginning as an alternative, but it can be an effective means of reaching out to neighborhood families with the gospel. Some churches leave the church building behind and take acts of mercy into their community, “treating” needy families with food baskets, gift cards, and the gospel message.

Those are good alternatives; there are others that are not so good. Some churches are using “Hell House” evangelism to shock young people and scare them into becoming Christians. They walk people through rooms patterned after carnival-style haunted houses and put sin on display–women undergoing abortions, people sacrificed in a satanic ritual, consequences of premarital sex, dangers of rave parties, demon possession, and other tragedies.

Here’s the problem with so-called Hell House evangelism: To shock an unshockable culture, you have to get pretty graphic. Graphic exhibits of sin and its consequences are unnecessary–unbelieving minds are already full of such images. What they need to see is a life truly transformed by the power of God, and what they need to hear is the truth of God in an accurate presentation of the gospel. Cheap gimmickry is unfitting for Christ’s ambassadors. 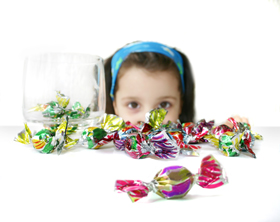 There’s another option open to Christians: limited, non-compromising participation in Halloween. There’s nothing inherently evil about candy, costumes, or trick-or-treating in the neighborhood. In fact, all of that can provide a unique gospel opportunity with neighbors. Even handing out candy to neighborhood children–provided you’re not stingy–can improve your reputation among the kids. As long as the costumes are innocent and the behavior does not dishonor Christ, trick-or-treating can be used to further gospel interests.

Ultimately, Christian participation in Halloween is a matter of conscience before God. Whatever level of Halloween participation you choose, you must honor God by keeping yourself separate from the world and by showing mercy to those who are perishing. Halloween provides the Christian with the opportunity to accomplish both of those things in the gospel of Jesus Christ. It’s a message that is holy, set apart from the world; it’s a message that is the very mercy of a forgiving God. What better time of the year is there to share such a message than Halloween?

What is the Gospel?

What does the Gospel and Great Commission have to do with Ebola?