Eastern Roots of the New Age

Here is an excellent overview of how the New Age with its Eastern roots in other religions is ever-creeping into Christianity.

By Marcia Montenegro from Christian Answers for the New Age. Republished with permission.

A term for a system of beliefs derived from religions based on the Vedas, a collection of texts and songs. These beliefs were a mixture of myths and traditions developed over time which finally came together in a unified philosophy. These beliefs were brought into India by the Aryans between 2000 and 1000 BC There was no written language before the 4th century BC, so religious stories and myths were transmitted verbally, mostly in poetry. “Hindu” is the Persian word for India.

Hinduism does not have one doctrine or one god, but many doctrines and gods, or one god manifesting as many. It has numerous branches, also called sects. There are two major types, Dualistic and Nondualistic (Advaita) Hinduism. The latter is the one discussed here since it is the one influencing the New Age.

Main beliefs are: reincarnation, karma (results of previous lives in the present life), enlightenment (realizing the true, divine self), material reality is an illusion, the rational mind is a barrier to spiritual enlightenment, meditation to realize the true self, and spiritual liberation by evolving over many lifetimes until one can merge with the Hindu godhead, the Absolute. This merging will result in a loss of personal identity and self because the true self is God, or ultimate reality.

One of the major ways to seek enlightenment is through one of the forms of yoga, which loosely translated means “to unite with.” All yoga, including hatha yoga, has one purpose: to transcend your awareness as a separate individual and merge with an impersonal God, or a universal force or oneness. 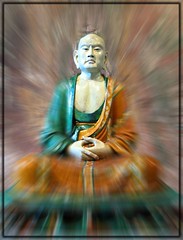 This movement started in India but quickly spread through China and other Far Eastern countries. It never took root in India. Buddhism was a reaction against many ideas of Hinduism including the caste system (people divided according to class standing caused by their karma), the idea of a true self, searching for ultimate meaning or reality, and the idea of gods or even an impersonal God.

Buddhism entered China in the 6th century, where it was called ch’an. Later it entered Japan, becoming Zen Buddhism. Zen emphasizes being aware of the present moment (in order to practice detachment), not looking for rational ways to understand reality, seeking the true nature of reality, and understanding truth without using thought or concepts.  Meditation is done with attention on the breath. The purpose is to eventually become detached from your identity, emotions and intellect in order to realize your true nature, the Buddha nature.

Zen does not like to use words, so it resists any description or analysis. Zen is supposed to be grasped in a way that goes beyond the rational mind. Riddles called koans such as, “What is the sound of one hand clapping?” are supposed to trigger your understanding of the truth that is not grasped with the rational mind. 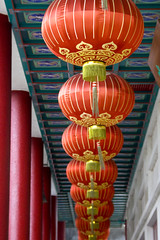 Taoism comes from the Tao, which means the way or the Universal Path. This belief teaches that the Tao is the ultimate reality and the origin of all things.

Yin and Yang merged into the philosophy of Taoism. Yang is the principle of activity, maleness, light, dry, & heat while Yin is the principle of receptivity, stillness, femaleness, darkness, moistness & cold. The way to harmony and peace is to balance the Yin and Yang forces. There is no concept of good or evil in this belief. The universe is a manifestation of opposite forces which are always merging into their opposites, since all is part of one source. This is the meaning behind the well-known black and white yin-yang symbol.

Eastern Spiritual Ideas in the U.S.:

Pantheism – All is God; God is all.
Panentheism – All is contained in God; God is contained in all. More subtle than pantheism, panentheism intermingles God’s nature and attributes with creation. Outside of New Age views, panentheism is found in mysticism and in neo-Christianity.
Monism – All is one; one is all
Polytheism – Many gods; God manifesting in many forms
*Pantheism, Monism and Polytheism are also in Wicca/witchcraft groups
Dualism
1) Material/matter versus immaterial spirituality
2) Two equal forces (such as Yin-Yang, or male/female)
Reincarnation – The soul incarnates many times to learn lessons
Chi/qi/ki – A life force pervading the universe; the basis for most alternative healing

These beliefs translate into contemporary spiritual thinking as:
1. God is part of everything and everyone
2. God is an impersonal force or energy; God is ultimate reality
3. The identify of self is an illusion; we are really part of God
4. The mind is a part of self and is a barrier to spiritual truth
5. The material world is an illusion we created or a denser form of energy
6. There is no absolute reality/there are many realities/there is an ultimate reality which is an impersonal God
7. Reincarnation is how we learn lessons and grow in each lifetime until we realize our divine nature and can merge with God (the oneness/universe/life force)
8. Experiences are valued over objective reality or rational conclusions
9. There is no evil, only ignorance

The response to the new spirituality

Madame Blavatsky, founder of the Hindu-based Theosophical Society in New York in 1875; the World Parliament of Religions in the 1890’s in Chicago; Eastern teachers in the U.S. in the 20th century or who have followers here — Swami Vivekananda, Yogananda, Sai Baba, Muktananda, Rajneesh, Maharashi (founder of Transcendental Meditation), Mahareeji, Meher Baba, Sri Chimnoy, Ram Dass, Deepak Chopra and others.

Is "Jesus Calling" in your library?