Is the pope signalling his openness to gay priests?

The Wall Street Journal is reporting that aboard the papal plane this weekend, Pope Francis opened the door to greater acceptance of gay priests inside the ranks of Roman Catholicism as he returned to the Vatican from his maiden trip overseas: 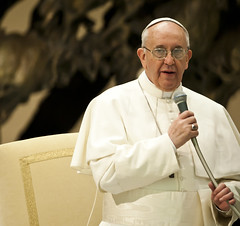 Fielding questions from reporters during the first news conference of his young papacy, the pontiff broached the delicate question of how he would respond to learning that a cleric in his ranks was gay, though not sexually active. For decades, the Vatican has regarded homosexuality as a “disorder,” and Pope Francis’ predecessor Pope Benedict XVI formally barred men with what the Vatican deemed “deep-seated” homosexuality from entering the priesthood.

“Who am I to judge a gay person of goodwill who seeks the Lord?” the pontiff said, speaking in Italian. “You can’t marginalize these people.”

The news conference was wide-ranging and hastily arranged aboard an overnight flight that returned the pontiff to Rome Monday from a weeklong trip to Brazil where millions of people flocked to see him, including three million at a Mass Sunday on the beach in Rio de Janeiro. The rock-star reception, analysts say, is likely to strengthen the pope’s hand as he confronts myriad challenges awaiting him at the Vatican, from corruption at the Vatican bank to the long-running sexual-abuse crisis.

Pope Francis’ remarks on homosexuality came as he mused at length on one scandal that erupted on his predecessor’s watch: A secret Vatican report leaked to the Italian media purporting that a clique of homosexual Vatican clerics had formed a “gay lobby” that was secretly pulling the strings inside the “Holy See.”

The comments cut to the core of one of the most challenging issues facing the Catholic priesthood. Bishops who run local dioceses have long been divided over whether to accept gay priests who are chaste. While some bishops are tolerant of homosexuality, the Vatican’s ban on gay priests has forced many clerics to keep their sexuality hidden from superiors who are likely to crack down.

For bishops, the issue boils down to if “you got a priest you know is gay but is not active is that a problem for you or not?” said John L. Allen, a Vatican analyst with the National Catholic Reporter. “For this pope the answer is ‘no.'”

The pontiff waded into the issue after a reporter asked him to comment on a report in an Italian magazine purporting that a Vatican monsignor named Battista Ricca promoted by Pope Francis engaged in gay sexual relationships years ago when he was posted overseas at a Vatican embassy in Latin America. The monsignor hasn’t commented publicly on the media scrutiny, and he remains in good standing with the pope, according to a senior Vatican official.

The media scrutiny of the monsignor’s personal life is a delicate matter for Pope Francis. In one of his first moves as pope, he appointed Msgr. Ricca as interim overseer of the Vatican’s bank while a special commission weighs the bank’s future.

For years, the bank has faced allegations from Italian prosecutors and regulators that its internal controls weren’t strong enough to guard against money laundering. On Sunday, Pope Francis suggested he was keeping all options on the table, from transforming the bank into a charitable fund to shutting it down entirely.

“I don’t know how this story is going to end,” the pope said.

Mary as "Co-redemptrix" with Jesus