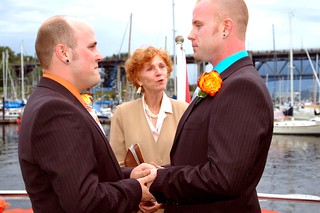 Crabb cited the Herbert decision by the US Supreme Court wherein the court ordered a stay in a similar case in Utah.

“[A] federal district court is required to follow the guidance provided by the Supreme Court,” she wrote. “Because I see no way to distinguish this case from Herbert, I conclude that I must stay any injunctive relief pending appeal.”

She also cited the confusion among county clerks as to the legitimacy of issuing same-sex licenses as a further reason to issue a full stay.

Milwaukee and Dane counties immediately began issuing licenses last Friday. Many county clerks refused to do so initially, but then caved to pressure from homosexual forces. Eventually, only 12 of the 72 counties stood their ground, following the directives of Attorney General J.B. Van Hollen, stating that, “County clerks do not have authority under Wisconsin law to issue same-sex marriage licenses.”

“I am very pleased that Judge Crabb has…fully stayed her ruling,” he said. “She has confirmed that Wisconsin’s law regarding same-sex marriage remains in full force and effect….”

Van Hollen is appealing the ruling to the Seventh Circuit Court of Appeals in Chicago. While the appeals process could potentially take years to decide, many expect that the U.S. Supreme Court will ultimately render a decision on the issue much sooner from a state that is further along in the appeals process than Wisconsin.

Wisconsin is the 15th consecutive state in the last year to watch its homosexual marriage ban struck down by a federal judge’s pen. The state’s constitutional amendment, solidifying that marriage is between one man and one woman, passed overwhelmingly by Wisconsin voters in 2006 59-41 percent.

“It’s very sad that something approved by voters and represented as the law in every state for the first 200 years of the Republic is all of a sudden declared unconstitutional,” lamented Wisconsin State Senator Glenn Grothman following Crabb’s initial ruling. “This will further the complete lack of respect that the public has for the judiciary.”

“The courts, for all their power, can’t overturn natural law,” he said. “What they can do is incite a movement of indignant Americans, who are tired of seeing the foundations of a free and just society destroyed by a handful of black-robed tyrants.”

Judge Crabb has received criticism in the past for what many perceive as judicial activism. She was reprimanded by a higher court in 2010 for unsuccessfully trying to strike down the National Day of Prayer as unconstitutional.

Governor Scott Walker has largely been silent following her latest ruling. His administration instructed the Office of Vital Records to begin processing the same-sex licenses given out over thus far in the state. Walker said he voted for the 2006 marriage amendment, but would not state his current position on the subject.

Many are concerned that the governor is trying to please both sides on the issue as he is gearing up for a potential presidential bid in 2016.

“This is a classic example of a politician playing both sides. He sends out Van Hollen (who will not be running for re-election) to be the fall-guy and oppose the homosexual marriages while he aligns himself with [them]”, said Pastor Matt Trewhella of the Milwaukee-based Mercy Seat Christian Church. “He will never get my vote again. He has spit in the face of Christ.”

“[M]any Christians have more fealty for the GOP and their politicians than they do for Christ,” he added. “They don’t seem to realize that by their not holding [politicians] accountable they help further the debauchery in our nation that we have all witnessed.”

Others in the state likewise called for Walker to respond more strongly, contrasting Walker’s silence with responses like that from Texas Governor Rick Perry after their marriage amendment was attacked by a federal judge in February,

“[I]t is not the role of the federal government to overturn the will of our citizens. The 10th Amendment guarantees Texas voters the freedom to make these decisions, and this is yet another attempt to achieve via the courts what couldn’t be achieved via the ballot box,” Perry wrote in an official statement. “We will continue to fight for the rights of Texans to self-determine the laws of our state.”

Normalizing sin for the kiddies: A Prince marries a Knight in new children’s book