Christian Genocide: How did we get here?

Over at the Religious Freedom Coalition, the headline, Islamic State Beheading Children – Putting Heads On Sticks In Mosul, Iraq, inspires the question: How did we get here? The RFC points the finger at the Obama administration. Read this and comment: 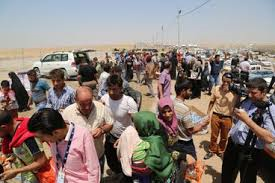 The brutal Islamic State terrorist army is wiping out the Christian population in Mosul, Iraq and is beheading children and putting their heads on sticks in a park in this city.

The beheadings were revealed last week by Mark Arabo, a Chaldean-American leader who is attempting to get the Obama Administration to act aggressively to stop this genocide of Christians in Iraq.

Jonathan Mann of CNN was stunned by this revelation. “You’re startling me with the severit of what you’re describing. You said they are beheading children?”

Arabo responded: They are systematically beheading children. And mothers and fathers. The world hasn’t seen an evil like this for generations. There’s actually a park in Mosul where they actually beheaded children and put their heads on a stick…. This is crimes against humanity. They are the most horrendous, the most heart-breaking crimes that you can think of.”

Barack Hussein Obama is largely responsible for this genocide against Christians and other religious minorities in Iraq. His military advisors wanted to leave at least 20,000 residual troops in Iraq to help stabilize the Iraqi government and its army. He rejected their advice — and now we have a genocide unprecedented in recent memory. Thousands are dying horrific deaths and hundreds of thousands are now refugees fleeing to other countries or into the mountains where they’re dying without food or water.

Read more on this at CNSNews.com. Retailers and Marketers put Christmas back in business