Sin? We have a pill for that. 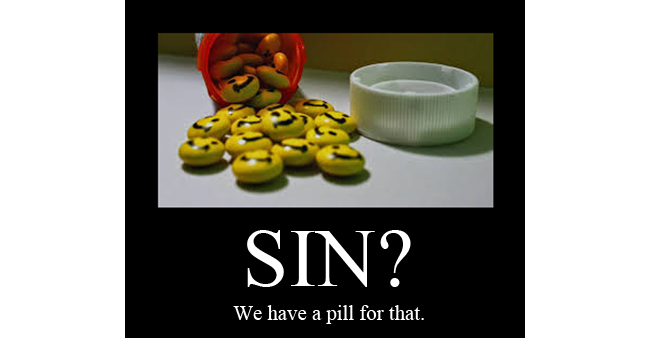 As Christians, we understand that things such as emotional pain, depression, and the like are often (though certainly not always) related to another term that we don’t hear much of in televised drug commercials or read about in prestigious journals of medicine: Sin.

As Christians, we also understand that sin leads to death, and along the way it inherently brings pain, despair, and (inevitably, if not steadily) increasing darkness.

Sometimes we are appropriately stricken with guilt or shame as a part of the convicting work of the Spirit of God through our conscience. This reaction is akin to our physical body’s programmed propensity to convey physical manifestations of pain as an alert that something is wrong and needs to be addressed. Similarly, certain forms of distress or pressure felt within our minds (and souls) are intended to warn us of the very real damage being done through our sinful behavior.

When we sin, we hurt. When we offend the nature of God, we hurt ourselves, and we often hurt others.

In this context, “feeling down”, even acutely so, can at times be just the warning that we need in order to inspire the one and only essential first step towards fixing the problem: Repentance.

But in a fallen America dominated by man-centered systems and worldviews, most of which center on exploiting others for gain and profit, notions of “sin” and “repentance” are not to be entertained…especially not when there’s so much money to be made and so much power to be had by ignoring (and purposefully amplifying) their impact.

So it is in America that we are conditioned to dismiss even the suggestion of proper shame any time it rears its unwanted (and shameful?) little head.

We are just as vigorously encouraged to blame anything and everything but ourselves for any and every destructive thing that we might have done, are doing now, or are considering doing in the future.

As Americans, we have had an “our way, right away”, “just do it” mentality marketed and engraved into our psyches for generations now, so it should be anything but surprising that we’ve become very open to avoiding that pesky conviction/repentance combo by way of a pill.

Right on schedule and according to plan, American corporations have been happy to oblige.

As a result, we’ve become a nation of purposefully addicted slaves…and often suicidal slaves at that.

The suicidal impulses warned of on millions upon millions of prescription bottles adorning the bathroom cabinets of tens of millions of Americans may tell us more than we’d like to know about the broader culture’s apparent appetite for self-destruction.

.By the Numbers: A Nation of Slaves and Addicts

As for some of the more acutely problematic sorts of (mind and mood altering) drugs coursing through America’s veins, we know that at least one in five (20%) of adults in America currently take at least one psychiatric drug.

“The medicating of Americans for mental illnesses continued to grow over the past decade, with one in five adults now taking at least one psychiatric drug such as antidepressants, antipsychotics and anti-anxiety medications,” according to an analysis released almost four years ago (and covered by Fox News).

The Fox report went on to note that,

“Among the most striking findings was a big increase in the use of powerful antipsychotic drugs across all ages, as well as growth in adult use of drugs for attention-deficit hyperactivity disorder (ADHD) a condition typically diagnosed in childhood. Use of ADHD drugs such as Concerta and Vyvanse tripled among those aged 20 to 44 between 2001 and 2010, and it doubled over that time among women in the 45-to-65 group, according to the report.

Overall use of psychiatric medications among adults grew 22 percent from 2001 to 2010. The new figures are based on prescription drug pharmacy claims of two million US insured adults and children reported by Medco Health Solutions Inc., a pharmacy benefit manager based in Franklin Lakes, N.J.”

One in five Americans…

The warning labels on most of these psychiatric drugs would qualify as masterpieces of tragically ironic comedy if they weren’t actually in use by so many (and many more by the year).

Clearly, we are a people committed to blunting conviction and avoiding repentance at any cost…including some of the most bizarre physical side-effects imaginable.

Again, let me be plain that I am not talking about all uses of all of these drugs being directly related to matters of sin, conviction, and the avoidance of repentance.

But, based on all available evidence, beginning with the testimony of Scripture, I am talking about the vast majority of them.

May God grace each of us with the desire to personally seek and apply His will on these and all other subjects of importance as we strive to faithfully proclaim and apply His Gospel to every realm in His creation.

Pills cannot save us. Only the whole, undiluted, supernatural Gospel of Christ can do that.

Thank you for your time and interest in these things! Come, let us dialog together