Are you calmly embracing reality? 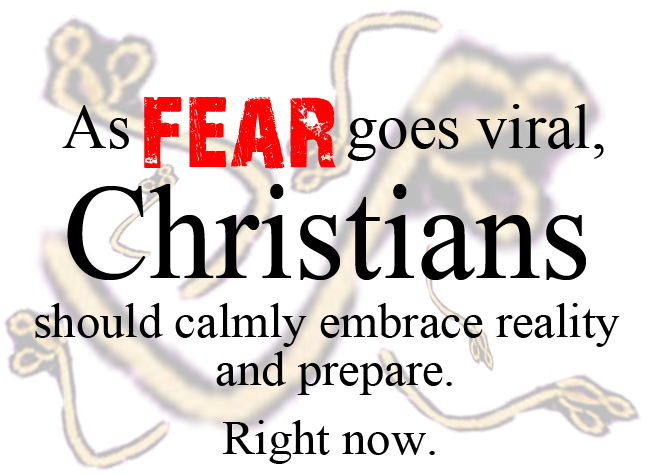 So we now have two confirmed Ebola sufferers who contracted the virus from America’s Ebola Airways–delivered Patient Zero, Thomas Duncan. Both of them are trained professional medical workers who, presumably, took fairly thorough precautions in dealing with Mr. Duncan.

Since the arrival of that first viral seed, Ebola Air has brought us a second opportunity for pandemic in New York City.

We’ve also learned in recent weeks that, according to a report released by the World Health Organization, present strain(s) of the Ebola virus may have a 42 day incubation period rather than the 21 day period that “experts” had assured us of only, well…most of them are still are assuring us of that, even after the WHO report. For those of you not in the loop on this subject, the length of time in which Ebola incubates prior to its carrier showing symptoms is a very big deal where containment is concerned. Longer incubation periods make for a much harder to contain virus.

With this sort of news popping out almost daily now, the bottom line sure seems pretty grim in certain ways. Fear is beginning to creep into the periphery of even some of the most apathetic and willfully distracted among us.

It’s in that context that I wanted to take a moment to share some links to some good preparation information and remind those readers who are Brothers and Sisters in Christ not to fear what is here and what may be coming, but to embrace it all as an opportunity to proclaim the Gospel and advance the Great Commission through obedient action.

The best way to help your body protect itself against Ebola (or any virus or bacteria) from NaturalNews.com is a useful article presenting a number of ways in which we can prepare our bodies (and specifically our immune systems) to deal with this and other viral threats.

FearlessPreparedness.com has also recently posted another excellent article on preparing for what may come by way of this plague. In Ebola: Personal Protection Equipment, they provide a solid follow-up piece to the excellent article featured here in last week’s Preparing for Ebola with Confidence and Hope.

My hope and prayer is that His people will seize information like this as it is made available to them, treat it in a Christ-like, appropriately serious manner, and apply what they learn.

In a sentence (or two): We must act as the responsible adults that Christ has called and equipped us to be. We must use all that we have been given – time, talent, treasure, and opportunity – to actively advance His Kingdom right here and right now…Ebola or no Ebola… (See: Matthew 28)

We have the chance to distinguish ourselves from both the phony religionists who claim Christianity but take a very lazy, apathetic approach to any number of challenges placed before them under the cover of a corrupt interpretation of passages like Romans 8:28 that “allows” them to do nothing that makes them uncomfortable or requires much (and maybe all) from them because, “it’s all going to work out anyway”.

This lazy, disobedient spin on the beauty of God’s sovereignty, when applied consistently, can just as easily be used by anyone aiming to justify doing anything that they want to do and avoiding doing anything that they do not want to do. We must avoid the temptation to join in this responsibility avoidance perversion, acting with all that the Lord gives us (in ability, resources, information, etc.) while trusting completely that He is in control and that it all really will work out perfectly in the end. Our obedience in action, even (and especially) when the storms are raging and the demands are heavy, will demonstrate to a watching world what true Christianity looks like in action, all by God’s grace and for His glory.

In this, we proclaim the truth and power of the Gospel and Great Commission as applying to every time, place, and issue…including Ebola in 2014 America.

As the fear mongers roar on one extreme end of the spectrum, and the apathetic, complacent “just ignore it and let God and/or ‘the experts’ handle it” try their best to pretend they don’t have a responsibility to act on the other, we as obedient ambassadors of Christ the King should be thankful for the clarity, opportunity, and tools that we have been given in order to do what needs to be done. What an incredible opportunity to act as the Body of Christ!

So don’t let the apathetic, lazy spin on Romans 8:28 or the endless attempts at “there’s nothing to see here” pacification from “the experts” fool you or prevent you from being – in action – the responsible, active agent for good that He has called and equipped you to be right here and right now.

And most definitely do not allow fear – the antithesis of true faith – to creep in, either. Take every action and make every preparation – using all that you are given by Him for the advance of His Kingdom – in full faith and confidence that everything is ultimately in His perfect hands. Obedience in action is victory.

May God grace His people with peace, joy, and a happy desire to act in obedience with everything that He has given them to face the challenges He has placed them here to face…all by His grace, all to His glory, and all to our eternal benefit.