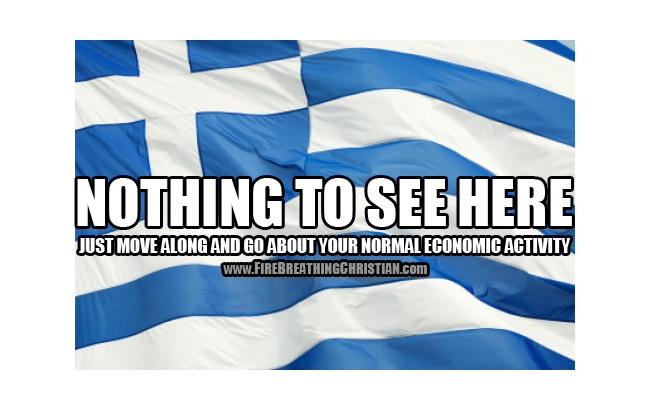 What would you do if you found out that banks in America were not going to open today – or anytime at all this week – and that all bank-held accounts were effectively frozen, with a $60 daily limit on withdrawals?

How would you feed your family?

How would you fuel your car?

How would you cool your home and power your precious cell phone?

These apocalyptic rhetorical questions are rarely taken seriously in an American culture that has been purposefully groomed for daily dependence on the State by its Corporate owners. Here in “the land of the free” and the home of the NSA, we are encouraged at every turn to blindly buy into the inherent invincibility of America.

So when we see reports of these things happening in Greece this week, we tend to pay little attention. That’s Greece. This is ‘Merica!

Things like riots and looting and mass protests by millions of citizens purposefully driven into State dependence can’t happen here. This is ‘Merica!

Things like “gay marriage”, a surveillance State that would make the Gestapo or KGB weep with envy, and the impossibility of even owning your own home outright could never happen in…wait a minute…that’s exactly what we have right now in ‘Merica. And it’s getting much worse by the minute.

These sad realities are all connected, however much we may like to pretend otherwise.

Our rejection of Christ’s Nature as revealed in His Word as the foundation of our economics has made us every bit the doomed dependent serfs and slaves that we now see walking the plank in Greece. (See: Fiat $lavery: We have been bought and paid for…with nothing.)

Economics are God’s property. They are a reflection of His Nature in His creation. As such, any who take a perverted approach to economics will suffer the consequences, and nobody has perverted economics more profoundly than the American Corporate State.

Greece is a piker by comparison, but there are many great and important lessons for Americans watching the elite-run system of designed debt and dependency swallow up the Greek economy, people and state.  (See: What’s the difference between a bankrupt Greece and a bankrupt America?)

The whole nightmare fiat slavery system under which we now labor is held together and enabled to continue on only because we dutifully avoid reality and avert our eyes any time some uncomfortable (and radically unbiblical) economic truth rears its head. We’re programmed from birth by the countless State and Corporate systems in which we are immersed to believe that the American Empire, which is clothed and empowered by the true nothingness of US dollars, is instead fully clothed, fully empowered, and practically invincible. It is exceptional. It is immune to God’s Law of economics…or anything else.

This is what we are being fed and what we are dutifully, compliantly, and eagerly lapping up, even as our Pagan “economic experts” chart the same long-term course to purposeful economic enslavement that is now coming into clear view in Athens.

It’s as though Truth has become Greek to us, leaving us unwilling and unable to see that Greece – and much worse – is a future truth for us.

As we said earlier this month in Greece is the word. (That nobody wants to hear.):

. . . remember: As Greece preps for implosion, our beloved Pagan Right “leaders” at home here in the “land of the free” and the home of the NSA are doing everything they can to secure the secret multinational trade agreement known as ObamaTrade. (See: Republican enabled ObamaTrade: Now *that’s* Progressive!)

Please acknowledge and repent of any role you may have had in your own hoodwinking. After all, if you’re anything like me, you were raised up and programmed through a State-run “education” system consecrated to the propagation of an explicitly anti-Christian worldview in every realm of life, so shaking off the cobwebs and embracing hard biblical truths that run counter to all of that Pagan programming can be hard (and painful).

I hope and pray that we will consider and submit to the lovingly sufficient Word of God as the essential foundation for economics and everything else. Lord willing, we might then by His grace finally be empowered to do everything that we are able with whatever He has given us to move ourselves, our families, and our culture more toward Him…and thus toward true and abundant life.

We have much to learn from Greece when it comes to economics.

And infinitely more to learn from the Nature of God as revealed in His Word.

So let’s get to it…while there is still time.