Get with the Big Gay Program…or suffer the economic consequences. 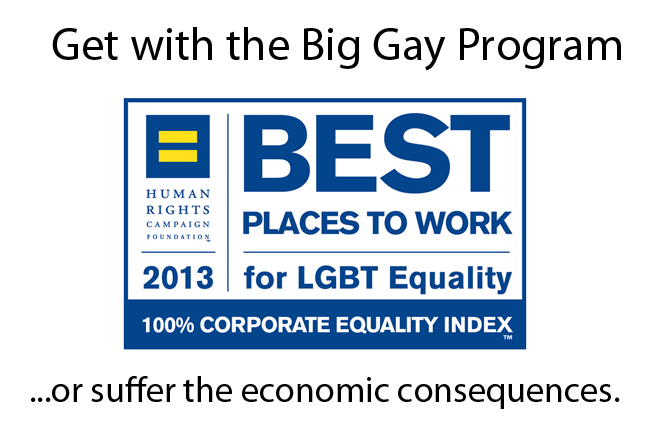 The anti-Christian economic momentum spearheaded by unbelieving elites atop Corporate America seems to shift into a higher gear with each passing month.

Where once it was stunning to hear of such things as Christians being fired for their fidelity to Scripture on the subjects of family, marriage, and sexuality, now such tales have become the expected norm.

In an article entitled Judge authorizes personal financial ruin for Christian woman, Stand Up for the Truth shared the tragic and increasingly commonplace tale of Christians who would dare take a stand for Truth having their livelihood ruined and their economic corpses fed upon by the homosexual activists who brought them down. Meanwhile, the stock market soars; valuations of the corporations encouraging this anti-Christian cultural transformation go up, up, up; and at the end of the day a culture of professing Christians seems perfectly happy to profit from the systems that increasingly persecute actual believers.

On the same day that the above article ran, Stand Up for the Truth also shared a story describing the termination of Atlanta Fire Chief Kelvin Cochran because he too committed the unpardonable sin of taking a clear biblical stand on the issue of homosexuality.

And so the slide continues toward a Mark-of-the-Beast-in-practice economic system in America.

As we’ve covered here time and again, the American Corporate State is in high anti-Christian gear when it comes to the overt, systematic economic persecution of those who would dare to stand for Christ in the public realm.

(See: Banks Inch “Mark of the Beast” Economics Toward Reality,

Another Big Gay (and “Christian” Enabled) Mark of the Beast…,

There is a great plus side to all of this, however.

As this climate takes further root, true Christians will be forced – or inspired – to band together to build businesses, families, and localized economies that not only allow for the exaltation of Christ, but encourage and even require it.

Put another way, through the challenges of this present economic nightmare with its foundations in greed and unbiblical economics that are designed to empower an unbelieving elite, Christians are likely to be driven to fidelity to Christ in ways and at levels previously not on their radar. By God’s grace, they may soon be moved out of necessity to build beautiful, lasting, Christ-honoring economic foundations that will glorify God and benefit them, their children, and their grandchildren in ways that are purposefully impossible under the current anti-Christian economic system holding the culture captive in its claw.

One way or another, and one day soon, “every knee shall bow and every tongue shall confess” the lordship of Christ in every realm of His physical creation, including the realm of economics.

The ‘Addicting Experience’ of Worshiping in a Super-sized Church

The growing power of governments

"Jesus Was A Terrible Leader, by Today’s New Leadership Standards"