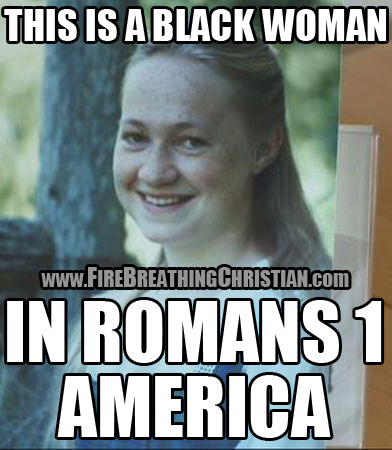 Okay, so by now we all know that it’s really, really easy to point, mock, and snicker at the raging, babbling insanity of many around us as we shake our heads in disbelief and self-righteously ask, “What is wrong with these people?!”

And people like Rachel Dolezal, who “feels” and “identifies as” black and therefore, in keeping with the theme of “if you feel like you are a thing, then you are that thing”, decided to live her life as a black woman.

Who can blamer her, really? She’s only doing what people naturally do when they reject the Nature of God as the standard to which they must strive to conform. Without that standard, there is no objective truth upon which to live, and, as we see now with increasing clarity…anything goes.

It may take some time for a culture’s decoupling from Reality to bare its darkest, fullest fruit, but after generations of overt rebellion and rejection of God as our basis for reality, we’re finally arriving at the outskirts of the hell we started hoofing towards when we first chose to make Him optional so many years ago. (See: Openly Reject God’s First Commandment? YES! WE! CAN!)

So Rachel Dolezal is black.

Bruce Jenner is a woman.

Remember: If that last one’s “true” to us (the bit about the “God-given ‘right’ to worship false gods”), then the others must have some validity as well, since by trading the one and only true God who demands exclusivity for one of many false gods who laud the “right” to worship any god that we like (which ultimately ends up being ourselves – AKA “We the People”), we have also traded away the objective, binding standard of truth upon which any and all truth claims are to be tested.

If God’s exclusivity is optional, then so is pretty much everything else…including definitions of gender, family, and ethnicity.

If God doesn’t define things here in “the real world”, then man is free to do so.

If ours is a worldview centered on the idea that We the People are “free” to pick, choose or dismiss entirely the Nature of the one and only true God, making Him anything but essential to life, then We the People have just “freely” detached ourselves from the only foundation upon which we may consistently and coherently define anything in God’s creation.

Right now, Pagan Right media is awash proclamations and criticisms of the rank inconsistency of the Left, centering on questions like: How can “Liberals” say that Dolezal isn’t black when they say at the same time that Jenner is a woman?”

Well, my Pagan Right (and Pagan Right influenced) friends, there is a very good and consistent answer to that question, though I don’t think you’re gonna like it very much.

The logically consistent answer to the question as to how these “crazy Libs” can possibly be so obviously inconsistent is..[drumroll]…wait for it…[insert Jeopardy! countdown music here]…: These “crazy Libs” are only following the example set by most “conservative Christians” in America, who have no desire to consistently apply the Nature of God as revealed in His Word as their standard for children’s education, law, civil government, economics, business, art…the list is practically endless. (See: Beware the “Gospel in a Bottle”.)

So who is most to blame for getting this inconsistency train a-rollin’? Who’s most responsible for where we are now? Who has paved the way for Dolezal, Jenner, and anyone else who wants to claim (and therefore be) anything else that they want or imagine themselves to be? (See: Judgment begins with the Church…not the Democrats.)

After all, “conservatism” now means someone who is only relatively (and temporarily) less flagrantly Marxist than the next guy.

A self-identified “conservative Christian” in America is typically all about “strengthening” rather than eliminating fundamentally Statist/Marxist concepts such as government-run children’s schools, Social Security, Medicare, income tax, and the perverse economic construct under which we now labor, which is based on money crafted out of thin air by a few so that they might then effectively own and control everyone and everything beneath them.

With a “conservatism” like this, you end up being – as we are now in ‘Merica – subjected to countless other redefined Orwellian gems, such as:

So really, is Bruce Jenner such a big deal, comparatively speaking? Is Rachel Dolezal such a “glaring example” of “Liberal stupidity and inconsistency”?

Sure, Jenner is a very big deal as a cultural indicator and Dolezal is indeed a shining example of Pagan Left hypocrisy and inconsistency.

But they are only doing what the “good conservative Christians” on (or influenced by) the Pagan Right have led them to do.

The Pagan Right will not acknowledge, much less bend in submission to the inescapable reality of God as the essential basis upon which we all must live right here and now.

They hate that concept as much as anyone on the Pagan Left.

Until the true Church rises and leads this land in repentance and active submission to Christ as King in practice in every area of life, this culture is (and should be) doomed.

The Pagan Right will never lead us to Him, just as the Pagan Left will never lead us to Him. There is no secular solution to the “man as god in practice” problem. Every secular “solution” only excuses and encourages the problem, rather than confronting and correcting it in accordance with the Gospel-fueled Great Commission. Pagan Right and Pagan Left “solutions” may seem fundamentally different, but they ultimately lead to the same dark, death-riddled destination. (See: Confronting the Gay Orwellian Party: Dragging the Pagan Right out of the closet and into the light.)

Until we understand these things and take up the one and only solution to the presently unfolding disintegration of family, gender and logic itself in America, there can be no hope for recovery…whatever Rush Limbaugh or the 2016 Republican nominee for President might tell you.

Let’s do something real, true and supernaturally empowered to actually save and restore that which has been corrupted unto death. (See: How to truly love (and really save) America.)

Let’s build our everything upon the one and only solid foundation for abundant life in each and every area of life. (See: Man up, buttercup. Rome wasn’t conquered in a day.)

Let’s obey Christ the King, take up His Gospel-fueled Great Commission, and start bringing true and lasting light to this dark and dying culture. Let’s bring rationality, creativity and abundant life to this culture and its people, one supernatural salvation and grace-fueled act of obedience at a time, all by God’s grace, for His glory, and to our eternal benefit:

And Jesus came and said to them, “All authority in heaven and on earth has been given to me. Go therefore and make disciples of all nations, baptizing them in the name of the Father and of the Son and of the Holy Spirit, teaching them to observe all that I have commanded you. And behold, I am with you always, to the end of the age.”~ Matthew 28:18-20 (emphasis added)

Former ‘Archbishop’ Desmond Tutu: I Much Rather Prefer to Go to Hell Than a ‘Homophobic Heaven’

Praying for His will

Top Christian stories of the year

A Biblical Approach to the Gosnell Verdict